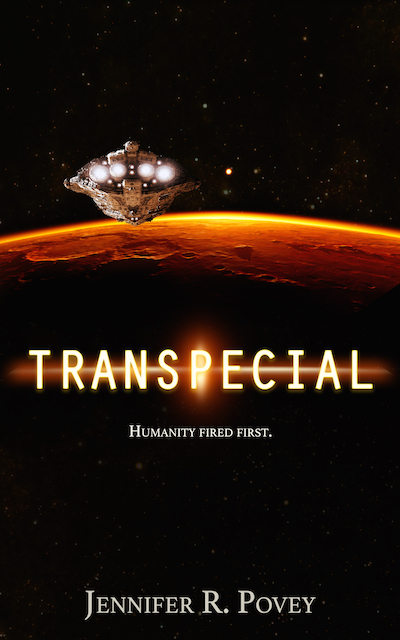 A ship has vanished in the dark, in the very outer reaches of Earth’s solar system. Alien invaders sweep through the void, destroying outposts and threatening humanity. The truth is known only to a few: We fired first. We fired on aliens whose very appearance and body language sent all humans into a flying rage. All but a few. Now an autistic savant from Mars and an alien diplomat seek peace…while some on both sides desire only conflict. Suza McRae and Haniyar must bridge the gap between their species, or risk a war that will destroy everything and everyone in its path.

The book that starts it all. First contact gone wrong – because first contact gone right belongs in the prelude. Aliens that humanity cannot deal with face to face; and yet must. A system-spanning war. And a young autistic woman who may be the key to a diplomatic solution.

People on both sides must find out how to talk and communicate, accept the fact that it will not be easy, and learn how to appreciate their differences. A first novel that deals with sweeping themes of biology, the nature of sentience, and destruction amongst the planets.

Space twisted in front of the bow of the ESS Valley Forge. The rift that formed meant only one thing to her experienced crew: a hyperspace jump.

An unknown ship was rising out of the warped space in front of the Valley Forge, forming right in their path.

“Evasive maneuvers!” Captain Simms did not so much shout as project his voice. Coming so fast after the disappearance of the Atlantis, could this sudden arrival mean enemy action?

The helmsman, Ensign Sarah Cole, had only to flicker her fingers across the controls. Her reaction times were two to three times faster than a normal human’s with no loss in accuracy. Like many specialist pilots and most infantry, Cole was webbed. An artificial nervous system supplemented her own.

Simms had refused that surgery. Half of those who accepted a web could never have it removed. Especially the infantry. They tended to become jittery. Edgy. Dangerous.

Irrelevant! Mark turned his thoughts back to the business at hand.

That was no human vessel. The ugliest thing he had ever seen, it looked like it had been designed by a particularly argumentative committee out of parts of several different ships. “Broadcast video from our bridge.”

If he could open communications with the invaders, then a fight might be avoided. He had to try. “Ready weapons, but fire only if fired upon.”

He leaned towards the vidscreen. They might send video. They might only send audio. He only cared that they sent a response.

Silence. Tension throbbed in his temples. Communications officers had to learn each other’s protocols. Mesh the two systems. Or the aliens did not intend to respond. Then the screen flickered into life.

Captain Mark Simms was face to face with a being from another world. It was bipedal, its hands having, by some coincidence, five digits like a human’s. It stood a few feet back from the viewscreen, showing its entire body. Its hairless skin seemed heavy and had an almost metallic gleam to it. Two eyes and one central orifice seemed to serve as both nose and mouth. It wore clothes. That surprised him. He’d always figured aliens would be more, well, alien. It spoke, but he didn’t understand a word. It moved, and the movement hit him like the sound of nails on a chalkboard. Had he been asked to describe it, he would not have been able to. He only knew it was wrong, so completely wrong that he gave a strangled cry and leapt back from the vidscreen.

“Fire!” Choking, he tore the order from his throat, but the crew was already moving. No rational thought to send a message to Earth, no thought to wait and see if the aliens were hostile.

Fire blossomed and silence enveloped space. The silence of the dark and deep, and the madness was over.

Find your own copy at: