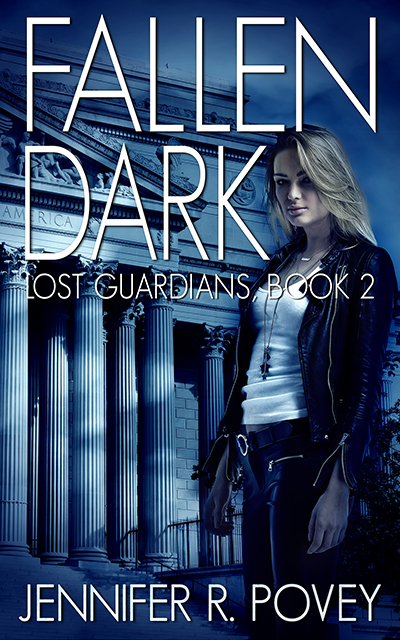 The long-awaited sequel to Falling Dusk.

When Victor Prince disappears, Anna immediately suspects rogue Guardian, Erica Turner, of the crime. Now she has to deal with the tension in their relationship as well as Erica’s insanity – knowing that lethal force will only create an even worse monster. All that, and there’s a witch hunter in town…

Second book in the four book Lost Guardians series, Fallen Dark sees our heroine learning to deal with her abilities, her feelings, and a teenaged girl who has become lost to darkness.

Can she save her? Can she, for that matter, save herself and her relationship?

A woman walked into a club. This event, that might normally garner no attention, did so to a surprising degree. The DJ, while she did not stop her work, looked up long enough to smile. The bouncer did not ask for any kind of identification, but rather tossed a bantering “Where have you been?” at her.

She dismissed him with a flicker of a grin and a quick, “Around,” as she headed for the bar. The grin, though, was just a touch strained, just a touch forced. Almost before she reached it, the barkeep started to make a screwdriver.

Her appearance meant little to most of the people here, who saw only a blonde woman in jeans and a tank top, removing a denim jacket.

She hesitated, then took a large enough drink to make one wonder about her intent. “Lyssa in?”

“She’s in the back. Where’s the boyfriend?”

“You know I’m not his keeper.” Her voice became a little uneven, uncertain, a sharp edge to it. One hand curling around the glass, she stalked into the back room.

The second she closed the door, she was struck by a furry missile. Britta, Lyssa’s feline companion.

Britta gave her a smug look that was the very echo of her own cat, Midnight’s, expressions. Not surprising, given Britta was Midnight’s mother.

The cat meowed then pointed towards the kitchen with her tail. She was not afraid to let Anna know exactly how smart she was.

She was also not above accepting having her ears rubbed, and then padded after Anna, purring. Anna wished she was in more of a purring kind of mood. Things had been peaceful for six months. She had time to study, to train. Even to worry about school.

Of course, school was not as important as it had been. Marketing? Like she would ever have time for a real job. Of course, maybe she could work for herself… Maybe she should change her major.

Lyssa was indeed in the kitchen. She turned, took one look at Anna. “What’s up?”

Anna felt, as she always did, a twinge of jealousy at this woman, over a decade older than her, who always looked fit to knock a man dead (although she preferred to have that effect on women). That was on top of being a competent witch, a decent combatant and Anna’s best friend. Quite possibly Victor’s too, if Victor had a best friend. “I don’t suppose you’ve seen Victor.”

“You mean he’s not with you?” Lyssa pushed back a braid and regarded Anna, dark eyes meeting hers with sudden concern.

“He didn’t come in last night. And he hasn’t bailed. His favorite gun’s still in the apartment.” Which worried Anna more than anything else, because were he in real trouble he would need that gun.

Lyssa rolled her eyes. “Boys and their toys. You sense anything?”

“Absolutely nothing.” Anna finished her drink, setting the glass down on the counter.

“And not the all’s well kind of nothing.”

She sank into a chair. “I’ve been looking all day. I suspect I am being blocked. What the heck could kidnap Victor?” The facade of all being well was starting to crumble. Victor disappearing was normal. Not being able to reach out with her magic and know where he was was not. He needed his me time, she let him have his me time, she knew he was not a man she could keep by clinging to it… He was lilin, a monster by most standards, but she knew he could be more than that. Not forgiven, no, not for what he had done in that previous life. But some measure of redemption. What if somebody had decided he needed to be taken out? It happened, it happened far too often, and normally…  but he’d left his favorite gun.

“Not likely to be fae, he’s fairly resistant to glamor…not like you, of course, but…” Lyssa tailed off. “What or who?”

They both spoke the name together. “Erica.”

Erica. Anna turned the glass of her second drink around. Erica Turner. Anna had hoped that when the young woman had disappeared, she had gone to get her head together. Maybe she still had. Maybe it wasn’t her.

Heck, maybe it was the mob again. Except, Lyssa should have been able to locate him, across the city, heck, across the country, with her epic talent for scrying. Something was blocking her.

Victor got into so many scrapes. He was not dead. Anna would have known that instantly… at least, she firmly believed that. Unlike many people in love, she had reason to believe superstition might in fact be true.

No, he was not dead. He was blocked or out of range, and what her instincts said, was the former. Erica could do that. So could a powerful Sidhe.

Or a completely new player. Process of elimination… and the easiest thing, she could not do tonight. She had to wait until dawn.

She did not go home, perhaps knowing sleep would elude her. Instead, she went through her mission prep. Armor, check. Weapons… most of them illegal to own and even more illegal to conceal.

Erica Turner. She hoped it was not her, but Lyssa’s instincts were often better than hers… more experienced. If they both suspected the kid had come back…

Anna had watched her lose her mother, her father, and her grip on sanity. The young woman had been born to be a Guardian, a mistress of white magic. Now? Anna no longer knew, except that Erica had tried to kill a twelve year old girl and fallen into darkness. It had taken a lot to keep her from being manipulated into killing a child out of vengeance, and then it had not been that she stayed her hand but that Anna had got there first, had dealt with the situation. Erica…was a problem. A problem that she felt a certain responsibility for.

Suddenly, she could no longer wait. She had sought Victor all day with no success, and she was no fighter. She needed him. But she was still halfway to the door before she pulled herself together. She needed him, but how much of that was her own uncertainty? No, she did not need Victor.

“Anna,” Lyssa said, “Be careful,” and then she vanished to seek contacts of her own.

She needed a plan. First, to contact the Fae. They might know something. She glanced at her cell phone. No, he had not called. He wasn’t answering his.

For Victor to be in trouble required a lot of force, mundane or mystical. More than she could take on alone if she went charging in. She would need Lyssa’s help, perhaps others. Charging in was foolish. Even if it was what Victor himself would have done.

So, she waited as night spun towards dawn, forcing herself to eat. Forcing herself not to drink any more. She even managed a brief catnap.

Finally, she stepped out before dawn. She checked her phone again. Nothing.

Well, it would not be the first time she rescued his supposedly damned ass from the fire.

Or from Amazon, Barnes & Noble, or Smashwords.