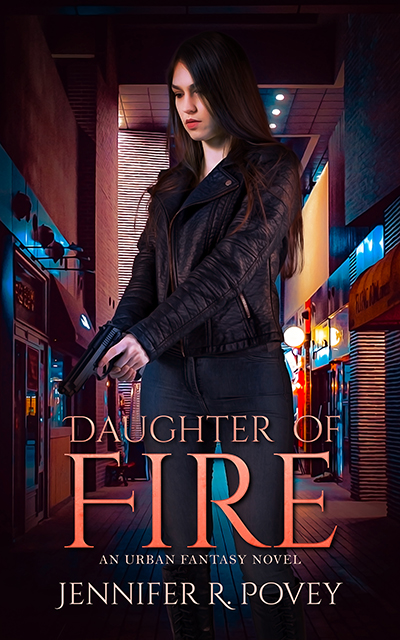 Inspired by classical mythology and Buffy the Vampire Slayer, this standalone urban fantasy has monsters, a badass female protagonist and absolutely no romance. (You either perked up or you didn’t).

A tale of magic returning to the world and the shenanigans of the old gods, Daughter of Fire is a Percy Jackson novel…for grownups.

Laura walked along the street quickly. She did not know the man next to her beyond his name….Patrick…and the fact that he was a cop. “Are we sure this is a set up?” The street ran through a canyon of skyscrapers, their glass walls towering above her. It was a place she was not familiar with, or comfortable in.

Patrick shook his head. “No, but we have good reason to think so. Yes, Jane Lawson had money, and her leaving it to you is feasible, but this particular lawyer doesn’t seem like one she’d use.”

Laura nodded. A dark feeling came over her, something in the pit of her stomach. Was afraid the right word? He was talking again.

“Let’s go over this again. If possible, I’ll stay inside with you. If not, I’ll be right outside.” He was fairly tall, dark hair, a face and manner that indicated he would not drink green beer…because real Irish people did not. Everything about his tone and body language gave a strong air of business as usual. As if he did this kind of thing all the time.

” Maybe she really did leave me a small fortune. Not that I need one, but…” Laura tailed off. If there was a fortune, there was nobody else to inherit it. Ella or Jane had given up parental rights, but somebody could leave their money to whoever they wanted to have it.

“It could be. I wish I could say for sure that it was. What I really wonder is the why of all this…maybe we can get that out of them.” The detective studied her for a moment. “You’re very brave, Miss Maxwell.”

“I want to know why they killed her, too.” And frankly, although Laura didn’t want or need Jane Lawson’s money…she might have some nice clothes and jewelry. Laura was not above dressing up, although right now she had dressed as if for a night after school. The cops had suggested looking like she did need the money. Not desperate, but not well off, either.

So, her jeans were designer ripped and she had left the expensive jewelry at home. She wore a tank top that showed off her tattoo. The outfit was dominated by black, with a bit of silver costume jewelry. Almost the goth look. She was even close to having the hair for it.

The lawyer’s office, at least, had checked out. Expensive, and, worse, in one of those skyscrapers. Laura did not like that, if she had to run. The cop had a gun, but she did not want him to use it. A lump formed in her throat. It was fear, after all, but it was not fear of what might happen to her. Fear of what she might have to be involved in. Of what she might have to do. Of whether she could do it, and the yes was far worse than the no.

An elevator, upwards, and she felt time seem to slow a little. She had experienced that before. Most likely, it was a result of her being stressed. She glanced at Patrick again. Perfectly relaxed, his hands loose at his sides, his eyes staring at the door as people did in elevators. He was probably remembering that there were a lot of cops, undercover, in the area for when things went south.

Laura was wondering what they could do when the doors opened on the twentieth floor.

Rich lawyers. Like her mother’s lawyers. Had it been the same one, she might not have suspected a trap. She knew she did not look like she belonged here. The carpet felt thick under the boots she was wearing. Boots were good for kicking people with.

There were three men in suits leaning against one of the walls, loitering. Laura knew at that moment that it was exactly the trap she feared. She could see no guns, but her awareness shot into a heightened state she had experienced only once before…when somebody had tried to mug her. He had failed because of it, because she had instinctively moved out of his grasp and then fled.

She said nothing to Patrick, but rather reached to grip his hand for a moment. How did she tell him she was worried?

The elevator doors slid closed. She saw no other access…the fire exit had to be somewhere, but it was not visible to her. Where was it likely to be? The map of the building flashed into her mind, clearer than memory normally was.

This lobby area had no windows to the outside. She wondered if the wire she was wearing even worked, or if the thickness of the walls would block it.

Then she was on the deck. There had been no conscious thought involved. Solid object. You were supposed to get behind solid objects. The gunshot had sounded a moment after she moved. She did not know exactly why. Almost as if she had known what would happen, known it and felt it.

“Fuck.” That was Patrick. Had he been hit, or was he just pissed off at the general situation? She did not know and could not spare the energy to care.

Receptionist’s desk. Solid oak. She was moving to pull herself behind it, except…too obvious. Another bullet, and her shoulder was suddenly on fire. “Fuck.” She never used language like that, but it seemed to fit the moment. Weapon. She needed a weapon. A weapon she was not sure she would know how to use. They had said she should not carry one for that reason. Because she would be too tempted to use it.

She had none, thus, except her fists. The snap of another shot impacted on her ears. Patrick was trying to shield her with his own body. No. She could not face the thought that he might die for her.

Two men now. He had, perhaps, already killed for her.

Time slowed even further. Her combat training was limited to a self-defense class, but they were focused on the threat. On Patrick. Another shot. Her shoulder still burned, but the arm worked. It could not be that bad, surely, and then she was on one of them, forcing him to the ground with the strength of desperation. The gun.

Her hand closed around the gun, wrenched it from his. His face was startled, then afraid. Another shot. And she was kneeling over him in a position that might have been, at other times, suggestive.

Everything was quiet. “Patrick?”

“Ugh. Are you hurt?” Genuine, if professional, concern for her.

“Yes, but I don’t think it’s bad.” She could be wrong. She had never been shot before, and the shoulder felt like a dull fire, as if somebody was rubbing a cigarette butt into it.

“My radio’s not working. I need to find a window.”

The other two men were dead. She trained the gun on the face of the one she had pinned. “You guys thought I was just a little girl, didn’t you?”

“Supposed…to be a boy.” He stared at the barrel of the gun, each word he spoke pulled out of him by it.

“There’s nothing I can’t do that a boy can, other than go to the bathroom standing up.” She’d always believed that, although normally she would not have put it so crudely. Now she had the power. It felt good, despite the pain in her shoulder. Too good. Something she might get used to, given the chance. Even come to truly enjoy. She shook her head, but she could not let him up. He was the one who knew something and only in stories did people like this have cyanide teeth, surely.

She wondered if the fact that they had, somehow, thought Ella Miracle’s baby was a son had slowed them down. Or maybe they had…

…waited until she turned eighteen. Waited until the adoption agency would release the records. Perhaps Ella/Jane had asked for them. Perhaps they had killed her to take them.

Damn. Could it be all about her?

Or get the ebook from Amazon, Smashwords, or Barnes & Noble.

Or the paperback here.