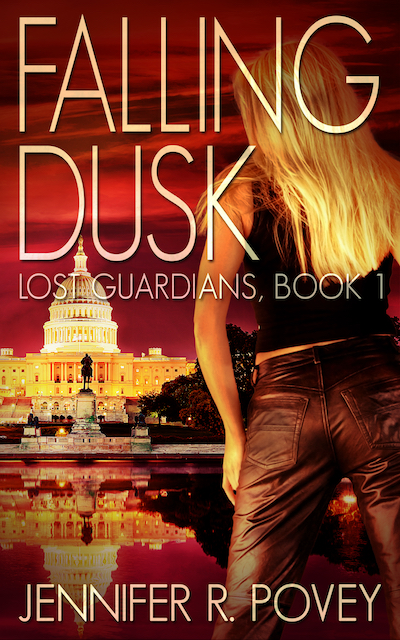 Anna McKenzie just wants her life back. She wants the brutal murder of her brother never to have happened. She certainly doesn’t want magic, power, and to deal with a certain vigilante named Victor Prince…

…but once the world of magic has claimed her, there is no escape.

First in the four book Lost Guardians series, the book starts with a brutal murder and spirals into a world of magic, mayhem, and romance. Anna McKenzie thought she was ordinary, but rapidly learns that is the last thing she is.

And then there’s the fact that she can’t take her eyes or mind off of Victor Prince, who claims to be a damned soul, yet dedicates his life to the cause of good. Perhaps it is that conflict that draws her.

Meanwhile, there seem to be quite a few people determined to take Anna out of the game for good. Oh, and a serial killer who likes the solstices and equinoxes.

Anna was an idiot. At least, that was what she had become convinced of. On the other hand?

For a long time, Stephen had been all she had had, since their parents died. She missed him since she had gone to one college and then he, two years later, to another. He lived with a friend in the interim.

She could not bear to think of him being mistreated, somehow, even if he was dead. Could not face the prospect of somebody mutilating his body, or cremating him without some kind of rites.

Sure, nobody could hurt him more. But they could sure as heck hurt her.

Which was why she was desperately trying to find Creepy Guy. And she did not want to solicit the help of the police.

He saved her life, but he had done it with a gun. Guns were illegal in the District, they’d have to arrest him if they found him.

That also limited her options. She was afraid to hire a private investigator, and had no clue, in any case, how one went about such. Outside of movies, and those always seemed to start with the client walking into the detective’s office.

Nobody ever explained how you found one in the first place. She even resorted to putting a classified ad in the paper, one designed to try and get Creepy’s attention.

God. If she at least had a first name, it would be easy. As it was, she resorted to a veiled description of the incident.

That was her first mistake.

Her second mistake was, of course, to go out after dark alone.

See, when one tries to get attention in strange ways, sometimes one gets the wrong kind of attention.

She had gone to a free concert on the Mall. Home was close enough she decided to walk.

She should have taken a cab. The block was all but empty when somebody tapped her on the shoulder.

She turned to face the most beautiful woman she’d ever seen in her life. Cliché, yes, but it fit. In fact, as straight as she was, she wasn’t sure she wouldn’t go lesbian for the being that faced her.

For some reason, she didn’t question why the woman knew her name. “Why?”

“Because you’re meddling with things you don’t understand, and once you cross the line, you’ll never go back. There’s no escape from our world.” The voice was a contrast to the appearance. It was harsh and rough, as if to ensure there was some imperfection. As if to keep her from being a Barbie Doll.

“I’m not giving up until I find him.”

Anna disagreed. “I’m a grown woman.” She began to feel anger rising within her.

The woman sought her eyes. When they met, she found herself unable to move, her irritation fading away. She was paralyzed and deep within her, she felt the stirrings of primordial terror.

The gaze was broken. “A demonstration, Anna. Go home, now. Don’t seek him out. Don’t put out any more stupid ads. Forget any of this ever happened.”

“I won’t forget my brother.” She was terrified, but defiant. Or maybe just plain stupid. Or maybe she had a strength she didn’t know. A combination of factors, most likely.

“Then you will die.”

She broke and ran, her feet pounding along the street. Suddenly, the woman was ahead of her.

Anna had never been a religious person. She hated church, she believed in no god. She prayed then, though. It did not work, perhaps because there was no faith to strengthen it. So, instead, she lifted her hand to slap the perfect face.

The woman stepped back, avoiding the blow with contemptuous ease. “You really think you can harm me, Anna Mackenzie?”

She was going to die for real this time. Then, perhaps, her prayers were answered.

Two Hispanic gangsters on motorcycles turned onto the block. The woman seemed to fade into the shadows. “Soon,” she promised Anna, and then…vanished.

At least, Anna could not see her any more. She fled, not even slowing down until she was in her studio and the door locked, deadlocked and a chair pushed up against the inside of it.

Maybe she should get out of town.

No sooner had she got the door secured than her phone rang. Not her cell. Her landline, which she almost never used and was not even sure she had given to anyone lately. Except him. Except for making it easy for him to find it. Or, from what she’d seen, anyone else with half a brain. She was an idiot.

She stared at it for three entire rings. She was convinced when she picked it up, she would hear that rasping voice. Finally she did. “Anna.” She didn’t identify herself further.

“Get out of town.” It wasn’t the rasping voice. It took her a moment to place it, a moment that took her back to the night and the canal and the blood. Creepy Guy.

“I’m not going anywhere without an explanation.”

“Then for the sake of whatever deity you happen to believe in, stay put.” He hung up.

She had no intention of going anywhere. She was breathing hard.

Such a fool. That bitch would never have found her if she hadn’t put that ad in the paper, hadn’t made it easy for friend and enemy alike. And whatever was going on? Only she knew it. She and creepy guy. Was she losing her mind? But no, that woman had found her and she had been real, real not a hallucination. Even in her ridiculous perfection, her sensuality…but then, wouldn’t a hallucination be sexy? Wouldn’t she hallucinate something like that rather than, say, a dumpy woman with a shopping bag on one shoulder. And even if it was real, that didn’t mean she wasn’t going crazy. She had every right to be a little bit crazy right now, every right to hallucinate, and perhaps she really had seen a man with claw hands or clawed knuckle busters.

Perhaps she had gone crazy that night and everything since was behind that veil of unreality.

Her head pounded, a headache both physical and mental. She was alive, and at some levels that was all that mattered. At others…

The guy wouldn’t have pulled him out of the canal just to dump him into the Potomac, surely. She entertained the crazy fantasy that he was, or knew, some kind of spiritual healer. That Stephen was alive, recovering in some hidden safe house. It felt entirely untrue, but she could not chase away the bizarre sense of hope.

She did the best she could, however. Hope was far too cruel a thing to cherish and honor. Stephen was dead. Then there was a bang at her door.

She peeked through the peephole. After this, she was going to get her number unlisted. Just in case anyone else involved  had seen that ad.

It was him. The delicate features, the near-black hair, the eyes she could not quite meet. She opened the door, but slowly. “I shouldn’t let you in here.”

She’d never been propositioned quite so bluntly. It made her respond at a similar level, a tingling in her groin in response to his words and appearance. She could not help but have her own eyes linger, but her words were brusque. “I don’t sleep with guys I’ve only just met.”

“Sensible,” he said, coming in the rest of the way, taking in the room. “I get that you want an explanation, but you’re really better off walking away. Leave town, keep your head down for a bit.”

He looked, for a moment, as if he actually felt a twinge of guilt. “I can’t let the police get their hands on him.”

“I told them it was some guy with hand claws.”

There was a long pause. “You lied to the police. Why?”

“I doubt they’d have believed there was a demon in Georgetown.”

“Whatever,” she said, finally turning to fully face him. Her anger was rising, but it mingled with something else, something that kept her from hitting him, kept her from really wanting to hurt him. She wasn’t sure what it was. Attraction? Maybe, but not quite like any she’d felt before. “It wasn’t human.”

“And you remember it.” He didn’t sound surprised, upset, or angry. Just faintly thoughtful.

“‘Cause most people rationalize this kind of shit away.” He stepped over to her window. “Most people would have decided it was a guy wearing hand claws.”

Anna frowned. “Okay, so I’m not most people. I still want my brother’s body. I have a fucking right to it.” She’d considered that it really was a guy wearing hand claws. Faced with him again, though, it felt too real, all of it. Solid.

He didn’t even flinch at her language. Instead, he studied her. “If I give it to you, will you get out of town.”

There was a long moment of hesitation, and then she nodded. “Alright. I still want to know what that thing was.”

“That thing? It was a gargoyle.”

“They’re a kind of fae, work as minions and lackeys for more powerful…”

She cut him off with a  lifted hand. “I don’t want to know. I really don’t. I don’t want anything more to do with any of this. I just want my brother’s body and then I’ll take it and go.”

“The cops won’t let you have it back for a long time.”

“Fine. At least then I’d know where it was, we’d know, we’d fucking know for sure he was dead.”

He closed his eyes for a moment, then turned away. “Your funeral.”

Buy your copy from: