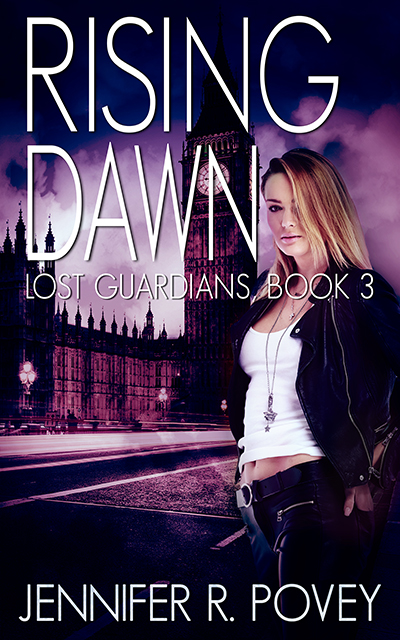 With the discovery that there are no more guardians, the third book in the Lost Guardians series takes our heroes to London, to pursue the one who might remain.

Unfortunately, they’re too late. Now they have a murder to investigate, a demonic threat, and a clock ticking against them. Meanwhile, Anna’s friend Lyssa is pursuing a romance of her own; but can any of them find a happy ending when the world is threatening to burn?

Taran’s house was whitewashed and had five stories, including the little “area” below the street. Anna decided immediately he had to be a wealthy man. There was a little fake balcony, simply a set of doors with a railing, above the front door, another one at the attic level and a satellite dish on the roof. Actually, a lot of the roofs had satellite dishes.

The cable provider here must suck, she thought wryly. There was a red mini-van parked outside, rather smaller than an American mini-van. No garage.

Victor strode up to the door, taking the four steps up to it in one leap and knocked with, yes, that actually was a lion head knocker.

There was something ineffably British about that.

Then the door opened, and a portly man in black-framed glasses peered around the edge. “Uh…”

“Taran knows we’re coming. Or should.” Victor frowned, and Anna noticed his body language tense up.

Victor reached for a gun he had not been able to smuggle in, his hand closing on the empty pocket. That meant this guy was not only not Taran but not anyone Victor expected or recognized..

“You…called last night, I found the voice mail. I’m sorry. Uh…” A pause, and he squinted slightly past Victor to regard the other three of the rather ill-assorted group. “Come on in, although it would be better if you talked to Ellen, I mean, I don’t know what was on his schedule.” A pause. “If Ellen was answering her phone.”

“Was?” Victor’s tone was acid as he entered the house, into a hall tiled in black and white.

“Was. He…he…” The man looked between them, his eyes resting on each one.

Anna felt a cold chill drop down her throat into her heart, as if she had just drunk an excessively cold beverage.

“His nephew. Mikey.” The man didn’t offer his hand to Victor, perhaps intimidated by that flat, cold tone. It would not be the first time.

Anna closed her eyes. “Victor, give him a break, this isn’t his fault.” There was something about the man, though, that was faintly irritating. Or, perhaps, she was just still tired. She had been tired a lot lately.

“But he knows something.” The tone stayed frigid.

London abruptly shouldered past them both. “I’ll talk to him.”

Anna was glad to defer that to the priest, to watch the two vanish. There was a certain similarity to their body language. She turned to Victor. “Any bets it wasn’t natural causes.”

“Not taking that one. How many people die of natural causes around us? Not even the ol…” He paused. “Too soon.”

“Too soon,” Anna said with a glare. “Even if she’d make the same joke herself.” She would, she thought, miss Rowan for all eternity.

Unless their souls somehow met again.

Lyssa had her eyes closed and was murmuring in ancient Egyptian. There was no way Anna was interrupting that, so she peered into the room on their left. It was an actual parlor.

An actual parlor. Maybe it was a British thing, but to her it stank of wealth. Elegant furniture, a coffee table with a couple of decorative books on it. “What did he do to afford a place like this?” Anna asked Victor quietly.

“Advised people. On all kinds of matters.”

That made a certain amount of sense. But it was still…Anna felt out of place. Her family was not poor, but there was something about this understated British elegance that made her feel as if she’d come in off of the street in rags. “Meaning whoever killed him could have had any kind of…”

“How did you know somebody killed him?” Mikey’s voice in the door. “You don’t know…” His voice became high, almost panicked. He was scared, although whether of them or the situation was impossible to read.

Victor smiled. “Didn’t London already tell you? We know everything.”

Or from Amazon, Smashwords, or Barnes & Noble.