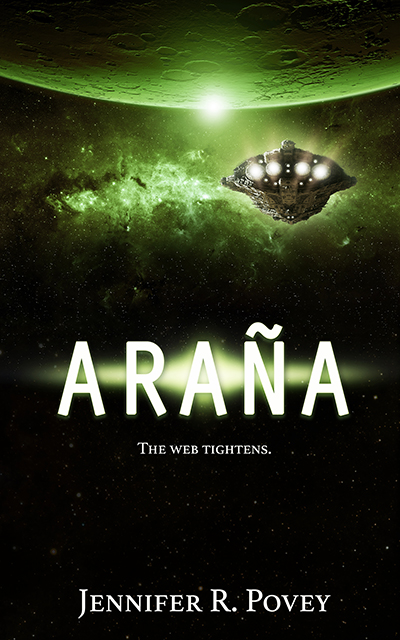 The Mars War is years over. Earth lost. And Earth’s first starship has gone out into the black. José Marin is crew on the second, a war veteran seeking a place to belong away from a world which has not welcomed him home. But when the Atlantis sends a distress call, the Endeavour must go to their aid, and discover a tangled web that Marin will be drawn into the very heart of. Now he must help find a way to save a world while his own world crumbles…

This brilliant space opera is in the same world as Transpecial (but is not a sequel – you can read them in either order). It deals with issues of colonialism, first contact, and how we treat veterans. Other inspirations include The Expanse and the works of Robert A. Heinlein.

“Filthy Araña!” The words, Spanish and English alike, echoed across the Caribbean street. Ugly words, darkening the entire scene. Rendering the slightly crooked balconies on some of the houses uncertain, dulling the whitewashing further. No jewel-like tones here, those were reserved for the cruise port and the space port, for the places where tourists came.

José Ricardo Marin Lopez studiously ignored the insult, wishing he had worn a shirt with longer sleeves, sleeves that would cover the tell-tale glint. The reflection of the sun against the induction points. He would be hot, but that wouldn’t matter.

From hero to spider. The war was over, years over, and Earth had lost, and they had broken their promise. Their promise to remove it, to leave him just as he was when he was a starry-eyed volunteer.

They couldn’t remove it without killing him. He had to believe them, because the alternative was cruelty he could not imagine.

“I’m talking to you, war criminal.”

He was a fool to provoke a webbed veteran, wired and conditioned to kill.

Conditioned to kill anyone not in Earthforce uniform because that was what Mars had done to them, had done for them. When even the kids might have guns. Red dust crossed his vision.

The man released a string of Spanglish invectives after him. They bored through José’s self-restraint. He gave the verbal assailant the finger as he hurried on. He broke into a jog as he moved along the boardwalk.

The man was alone. He would not continue to go after José.

But the words still hurt.

And, of course, war criminal. He couldn’t swear to not being one, the thought of what had happened, of things he had done, was as much what quickened his pace as…

He was not afraid of the man. He was afraid of what he, himself, might do to the man. Afraid he would hurt him.

He could already feel the web preparing, the shot of adrenalin. Imagined or remembered was the feeling of human flesh under his knuckles.

The desert training, the sparring under the Chilean sun, the thin air of altitude, all of that welled up within him.

He had to get away before he punched the guy, possibly killed him. No civilian could take on webbed reflexes, and his conditioning was telling him this man was a threat. Making his fingers itch for a gun.

It was a mistake to come back here.

It was a mistake to come home, to the land where he had been born. The island sun beat down on him, not as thin, not as cold. The sky arced overhead, deep blue, human space after the confinement of ships and domes.

José closed his eyes for a moment. He almost tripped over something, some irregularity in a sidewalk that had been washed over by hurricane after hurricane.

He was in the eye of the hurricane of his life.