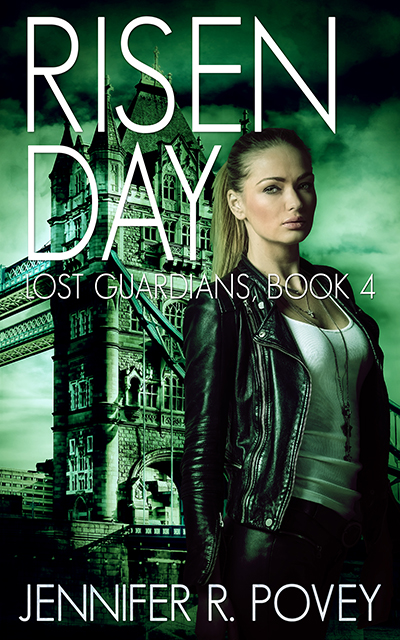 The long-awaited conclusion to the Lost Guardians series. After saving London from demons, our heroes discover the final pieces of the mystery. The true identity of Anna, the details of the plan to take over the world, and a prophecy that will take them down a dark path.

With the help of the rest of their team, Victor and Anna have to deal with the forces of Hell, the tension in their relationship, and the fact that it seems like they can never truly be together.

The reading of Taran Blackmoor’s will took place in a solicitor’s office. Anna listened with half an ear.

He left everything to Mikey. Or, if Mikey died first…but Mikey hadn’t died first.

Had Mikey left a will? The library was her primary concern.

No, the larger problem was. The world was under threat, and this time she felt it was real. More than a threat to a few people or a single city.

She slipped back out – she had no place here, but they had to get the books to safety even if it meant stealing them. And that, at least, would distract them from the fact that the one person who might know why there were no more Guardians was still missing.

And distract her from…her own problems. She had forgiven Victor his anger, but that didn’t mean they didn’t have an issue.

An issue which made her wish she already had him bound by marriage vows. Just in case. Just in case he tried to run. Or maybe that would not be enough, but it would do one thing. It would ensure that if anything happened to her, nobody could argue that their daughter was his.

He was outside, leaning against the wall. “So…”

“So we have to find Mikey’s will. This is going to take months.”

“I talked to the archdruid. We know who the place should go to, but arranging it is going to be tough.”

“Rahel,” Anna said simply. “No way to make that happen, though.”

He was going to do something shady, and she decided she didn’t want to know. Ignorance truly was bliss, some days. Especially when you were engaged to somebody with a sometimes uncertain relationship with the law.

“I’m not buying it with fairy gold,” Anna quipped. “She’d kill me.”

Rahel’s view on illusions and glamorie was, after all, pretty much set. Even if she had made the house disappear to anyone who had no reason being there. She justified that as not being, quite, the same thing.

“She probably would. Then Lyssa would dump her and I’d be left with the mess.” Victor winked at her. “Let’s get lunch.”

Anna’s stomach agreed with that course of action even if no other part of her did. “He probably didn’t leave a will. What happens under British law?”

“…which he didn’t have. And, thus, no nieces or nephews. Taran?”

“No children. Confirmed bachelor.” Victor made air quotes. “Which means something a little different here.”

“Am I the only straight person in this entire mess?”

“No,” was all he answered, amused. “Point is, there’s nobody. Which means it goes bona vacantia.”

“They’ll probably sell it. Unless it goes to the US, which it might.” Victor shrugged. “I don’t even know which state Mikey lived in.”

Victor pulled out his burner phone. “Pretty standard. Mikey’s parents were deceased, no spouse, no children. So, they’ll do their best to track down a relative, and if that fails it will escheat and…”

“…and we buy it. If we can. It’s a London townhouse, Victor. And Rahel can’t help.” Rahel was many things. Rich was not one of them.

Victor nodded. “What I’m hoping for is that some cousin will show up, won’t want it, and will cut a deal with us. We really don’t want it to go bona vacantia ’cause they’ll hold onto it for years.”

“Why don’t you look? You’re the detective.”

He grinned. “Of course. After lunch.”

London was a different city now the demonic influence was gone. The Eye was also gone, although they were talking about rebuilding it.

Anna almost hoped they didn’t but knew they should. It had become too much a part of the city not to be replaced in some way, no matter how ugly it was.

Victor went back to the house after lunch – they still had access to it for now. Anna felt safer alone now – although she had protection she knew would last for…a while.

Until her child was born. She hoped Victor could deal with it.

She also hoped he wouldn’t argue about the name she had already chosen for a girl. If it was a boy, he could choose.

Taran wasn’t a bad name. Thinking about it, the name she had chosen for a girl was unisex enough to still work. But no Nebuchadnezzer, she thought wryly. No ridiculous names. Her child would, she hoped, not want to be known by a nickname.

She was sure it was a girl, but many women had that certainty and found themselves to be wrong.

At least lunch had settled.

Rahel and Lyssa were walking down the embankment towards her, arm in arm.

She didn’t ask how they’d found her…there was no point when one of them was an expert witch and the other talked to the spirit of the city. “Hey.”After a moment, “Any luck with your old man?” Anna asked.

“Oh, he grilled me,” Lyssa said. “But I expected him to. He’s…disappointed I’m not Hindu. We ended up having a long talk about theology.”

“I almost wish I’d been a fly on the wall. Almost.” Anna grinned. “You know theology goes over my head half the time.”

“London would have been entertaining.” That was Rahel.

It was a reasonable guess.

Lyssa nodded. Then she turned to Anna. “I need to talk to you.”

Anna frowned. There was something about that ‘talk’ that spoke of something serious.

She turned to Rahel, hugged her, and then led Anna a bit away. “About the club.”

“I don’t know. Who knows what it would turn into.”

“Rahel doesn’t meet the minimum income requirements to get residency for me. I may have to go back anyway. Possibly for years.”

“Can her father help?”

“No, it has to be her income. And the fact that I’m rich doesn’t help because the club’s not in the UK.”

Anna sighed. She glanced over at Rahel. “So, what, you can get married but then have to leave?”

“And then she has to get a better job. For at least 3 years.”

Anna closed her eyes. “There’s no way around it?”

“None. I even talked to a lawyer. They advised us to go to the US. And she can’t.”

Anna wanted to swear. Wanted to hit something.

“There have been cases, but the supreme court has backed it as legal. They did say they should change the rules…but only for people with kids.”

It wasn’t fair. Anna felt horribly guilty and privileged. After all, she had no such problems. “And I suppose…selling the club wouldn’t help, so….”

“No. And she doesn’t have the savings requirement.”

“What if you sold the club and bought one here?” Anna paused.

“…what if I did? I had in mind keeping it and hiring you to manage it.”

Which confirmed Victor’s theory, Anna thought, that Lyssa and Rahel might be soulmates, bound together perhaps even through multiple lives. She hugged her friend. “Look into it.”

It felt right somehow. And the only other option was for Rahel to be forever split in two.

For hearts to be broken. And a healer did not let hearts be broken if she could see a way around it.

They walked back over to Rahel. Lyssa wiped off what might have been a tear.

Anna suspected that she was waiting on the visa stuff to propose. If it could be solved.

“So…” Rahel looked between the two.

“Business talk. About the club,” Anna supplied. “We should talk about our larger problem, too.”

“I asked London where Morgan was.”

Anna knew she meant the city not the priest. “And?”

Which might mean, Anna thought, that she was a child. What did they do if that was the case?

Could they afford to wait for her to grow up?

Or from Amazon, Smashwords or Barnes & Noble