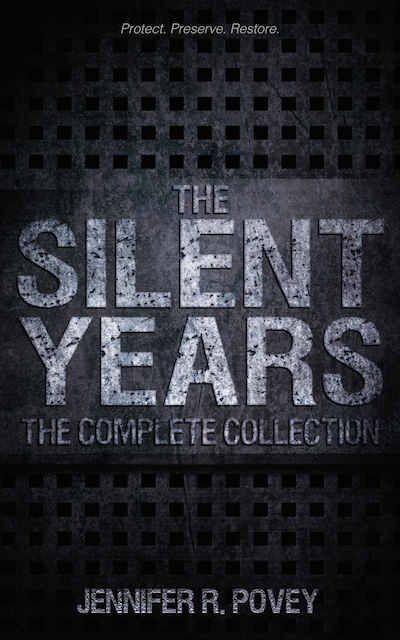 Dorothy Mayling thought her worst problem was an ongoing family feud – then the Silence came and assaulted her family, the people she was determined to keep safe.

Helen Locke fought to hold together a bastion of civilization against the zombie-like Silents and those who would rather be savages alike.

And young Becky was a survivor, raised in the aftermath, and only wanting to live her life – when the true horror of the plague was revealed.

These three novellas, originally published separately as Mother, Crone, and Maiden are now available in one combined edition.

They tell the story of the zombie apocalypse through the eyes of three very different women – a formerly privileged white woman in the American South, a politician struggling to hold together the remnants of civilization, and a girl who does not remember the world before.

This is not your mother’s zombie story – far from being a Walking Dead style gore fest it is a quiet apocalyptic horror that deals far more with the reactions of humanity to the end of civilization, and the difficulties holding it together, rebuilding it, and working out who, in the end, should lead.

Some people called Los Angeles a suburb of hell. The government closed down that city, too. And Portland. As if the contagion was being blown down the coast.

Perhaps the Rockies were a barrier. Perhaps this “flu” would stay that side and burn itself out.

The TV blared with some preacher’s take on the virus: “This is what happens to the nest of iniquity. The actors! The homosexuals!” His voice was gravel.

Dorothy changed the channel. She did not want to listen to a preacher rant right now. It was not the gays’ fault that there was flu in Los Angeles.

The news channels weren’t showing any images from the west coast, official or otherwise.

The boys were playing with their consoles. Thomas was wrapped in a book, his nose buried in physical pages. They were distracting themselves, she knew, just as she needed to.

She slipped out of the room to check the computer. No matter what the quarantine, somebody would have smuggled images out. She had a sudden urge to see what was going on, to know a little more.

She found images that would haunt her for the rest of her life.

Image: a hospital ward full of people chained to their beds.

Image: a riot at the foot of Seattle’s Space Needle, with the police firing tear gas into an oncoming crowd. The faces in the crowd were oddly blank.

Image: a man in a street that could be almost any American city. He had a gun in his hand and was looking down at a body with a look of utter sorrow on his face.

Image: a child, looking at the camera. With this one, there was sound. She babbled nonsense, a serious look on her twelve-year-old face.

Dorothy’s head sank into her hands, unable to look further.

It was not the flu. It was something else, something new. Something that turned people violent. It was sweeping the country. A blaze. A fire.

Maybe they needed a fire, a cleansing, but… she was haunted by the face of that child who spoke nonsense but expected to be understood. Haunted by the blank faces of the crowd.

Somebody, she was not sure who, had given it a name, a name that propagated through the net’s underground and then popped up here and there. The name spread like the plague itself.

They were calling it the Silence.

That was the effect it had on Dorothy, momentarily stealing her speech. It was spreading. God, it was spreading like fire in a California valley in the dry season.

In Dorothy’s mind, the face of the child morphed into Junior’s face. That image lingered in the shadows behind her eyes.

The Silence would not come here; it could not. They…

…did not have it contained.

Image: Japanese women surrounding the cameraman. There was no audio, only the frustration and despair in their eyes, the fear of what might come or what might already have happened.

This virus could…could what? Maybe these people would recover in a few weeks and be fine. Or maybe everyone was going to die.

Dorothy could not believe it would be so simple in light of the images she viewed. Fear for her children choked her, nothing else on her mind right now. She decided that the boys were not going to school again until this “Silence” was all over and someone had found a cure for this…whatever it was.